Judi and Berry started their 38-year life adventure together when they met at the University of Florida in January 1981. They were involved in a variety of academic and campus activities at UF to include both serving as President of the College’s student association, LEAPS, with Berry serving from 1980-81 and Judi from 1981-82. Berry graduated from UF in 1982 and Judi graduated in 1983.

Judi and Berry were married August 1983 and began their life together that has included raising four sons while living and working around the world. They recently completed their 20th move together that has included living and working in multiple locations in the U.S., Japan, Cuba, and Germany. They spread the “Gator Nation” chomp all around the world to fellow Gators!

Judi and Berry are currently employed by the Department of Defense (DoD). Judi is serving as a Child, Youth, and School Services Program Analyst and School Liaison Officer for the Headquarters, Department of the Army in the Pentagon. Berry is the Director, Morale, Recreation and Welfare, and Resale Policy Directorate, Office of the Secretary of Defense for the DoD in Washington, DC. During their careers they have worked in program, branch, division, and department positions at installation, region, and headquarters levels of the DoD organization, to include assignments with the Navy, Army, and Air Force. 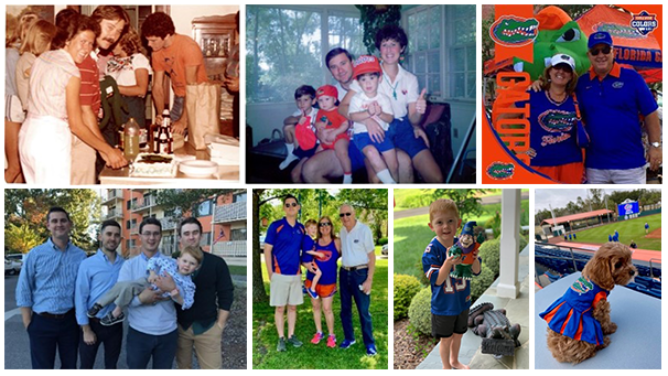 Judi and Berry are proud parents of four sons who are all Gators, to include Joseph (26), is working as a data scientist for Booz Allen Hamilton in their Health Account and pursuing his master’s in Biostatistics at George Mason University. He was honored to have an internship at the National Institute of Health and Wounded Warrior Care Center at Walter Reed National Military Medical Center. Justin (30), who works for Marriott in St Pete, FL, and his girlfriend (also a Gator), Carly Howell, who is currently in her last year at Stetson Law School; Jordan (32) is the Chief Product Officer at Harness, Nonprofit industry leader in recurring giving and donor experience automation. He was the Outstanding Young Florida Alumni Leader of the Year, Tampa UF Alumni Association, 2019-20. Jordan’s girlfriend, Maegan Bridwell is a Gator too and an attorney in Tampa, FL; and Jake (35), owns Protocom, an aviation company; instructor pilot; and is the Director of Training at Dauntless Air, an aerial firefighting company dedicated in the effort to suppress and contain wildfires out west. Jake has an adorable son (their first and only grandson), Blake (5) whose Mom is also a Gator. They have two Cavapoo puppies, Josie (5 months old) and Jessie (8 weeks old), who have no choice but to be Gators. It’s great to share about this family of Florida Gators!